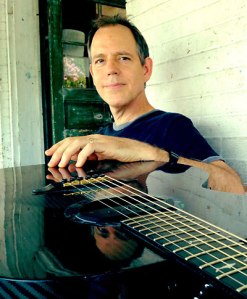 David Wilcox is a true American treasure. He has sold over 750,000 discs and has been writing songs for 30 years. He is known for his open tuning acoustic guitar, sawed-off capos, storytelling wit, and insightful metaphors. His songs are a strong elixir. Music distilled. David Wilcoxbelieves that the right song at the right time changes people’s lives. blaze, a brand new collection of David Wilcox originals, was just released in 2014. As Wilcox notes in his liner notes, blaze is a “complex blossom of contradictions that is held together at the center by this blissfully focused state of mind that I first came to know while pedaling across the country.” The blossom of this record has petals that go out in different, seemingly contradictory directions. With blaze, David Wilcoxhas stayed true to himself, and artistically alive no matter what, leaving only the path ahead and the trail to blaze.

“A charismatic performance by a star still waiting to be discovered by a much larger audience.” – The New York Times.