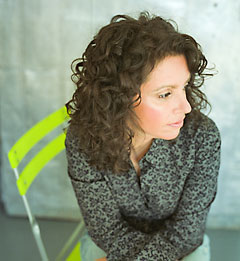 She started out singing in Chicago bars. Then, barely out of high school, Lucy Kaplansky took off for New York City. There she found a fertile community of songwriters and performers Suzanne Vega, Steve Forbert, The Roches, and others. With a beautiful flair for harmony, Lucy was everyone’s favorite singing partner, but most often she found herself singing as a duo with Shawn Colvin. People envisioned big things for them; in fact, The New York Times said it was “easy to predict stardom for her.”

But then Lucy dropped it all. Convinced that her calling was in another direction, Lucy left the musical fast track to pursue a doctorate in Psychology. Dr. Kaplansky took a job at a New York hospital working with chronically mentally ill adults, and started a private practice. Yet she continued to sing. Lucy was often pulled back into the studio by her friends, (who now had contracts with record labels) wanting her to sing on their albums. She harmonized on Colvin’s Grammy-winning Steady On, and on Nanci Griffith’s Lone Star State of Mind and Little Love Affairs. She also landed soundtrack credits, singing with Suzanne Vega on Pretty in Pink and with Griffith on The Firm and several commercial credits as well, including The Heartbeat of America for Chevrolet.

When Lucy’s solo tapes got into the hands of Bob Feldman, president of Red House Records, he was blown away. Suddenly, Lucy was back in the music business. She signed with Red House and started playing gigs. Red House released The Tide in 1994 to rave reviews, and within six months Lucy signed with a major booking agency, began touring so much it required leaving her psychologist positions behind. After that Lucy’s success took flight with back-to-back hit albums. In 1998 Lucy teamed with Dar Williams and Richard Shindell to form supergroup Cry Cry Cry, and recorded some of their favorite songs written by other artists. The CD of the same name was dubbed by The New Yorker“a collection of lovely harmonizing and pure emotion.”

In 2010 Lucy joined up with acclaimed singer-songwriters John Gorka and Eliza Gilkyson to record an album as part of new folk super-group Red Horse. Lucy is also featured on a new Bob Dylan tribute album, A Nod to Bob 2, featuring her performance of the Dylan classic “Every Grain of Sand.” Now with 8 Cd’s, latest Reunion (2012), Lucy continues to perform nationally and internationally, as a solo performer and with Red Horse.