← A Celtic Christmas at Baldwin’s Station on Thursday, December 1st is SOLD OUT!
Your generous donations allow Uptown Concerts to continue to bring you world-class music →

She started out singing in Chicago bars. Then, barely out of high school, Lucy Kaplansky took off for New York City. There she found a fertile community of songwriters and performers — Suzanne Vega, John Gorka, Bill Morrissey, Cliff Eberhardt, and others — where she fit right in. With a beautiful flair for harmony, Lucy was everyone’s favorite singing partner, but most often she found herself singing as a duo with Shawn Colvin. People envisioned big things for them; in fact, The New York Times said it was “easy to predict stardom for her.”

Lucy temporarily left the musical fast track to pursue a doctorate in Psychology and open her own private practice, although she continued to sing. Lucy was often pulled back into the studio by her friends (who now had contracts with record labels), wanting her to sing on their albums. Now, performing full-time, Kaplansky’s voice continues to remain in high demand by her peers. She harmonized on Colvin’s Grammy-winning Steady On, on Nanci Griffith’s Lone Star State of Mind and Little Love Affairs, and on four of John Gorka’s albums. She also landed soundtrack credits, singing with Suzanne Vega on Pretty in Pink and with Griffith on The Firm, and several commercial credits as well — including “The Heartbeat of America” for Chevrolet. She can also be heard on the Greg Brown tribute album Going Driftless (also featuring Ani DiFranco, Iris Dement, Mary Chapin Carpenter, Gillian Welch, Eliza Gilkyson, and others). 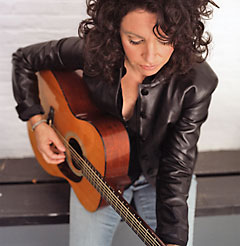 She teamed with Dar Williams and Richard Shindell to form the supergroup Cry Cry Cry, the three choosing to celebrate the amazing revitalization in contemporary songwriting. The resulting album, Cry Cry Cry (which The New Yorker dubbed “a collection of lovely harmonizing and pure emotion,” and to which Entertainment Weekly gave an “A” rating), has been an astonishing success in stores and on radio. A national tour of sold-out concerts by the trio served to introduce Lucy’s luminous voice to a new expanse of eager listeners.

Lucy’s The Red Thread followed the commercial and critical hit “Every Single Day” (released on 9/11/2001) and marked Lucy’s tenth year (and fifth album) on Red House Records. Lucy’s rising popularity has led to appearances on the CBS Morning Show, NPR’s Weekend and Morning Editions, Mountain Stage, West Coast Live, Acoustic Cafe, and Vin Scelsa’s Idiot’s Delight. Lucy also contributed her story to a unique new book, SOLO: Women Singer-Songwriters in Their Own Words, which includes some of the best known women on the music scene today including Ani DiFranco, Shawn Colvin, Sheryl Crow, Jewel, and Sarah McLachlan. She was also featured in Lipshtick, a collection of essays by NPR commentator Gwen Macsai.

← A Celtic Christmas at Baldwin’s Station on Thursday, December 1st is SOLD OUT!
Your generous donations allow Uptown Concerts to continue to bring you world-class music →