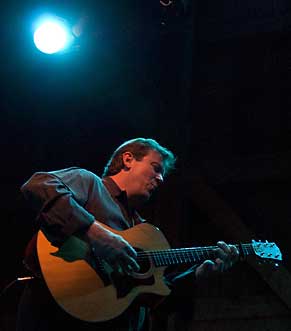 For over thirty years Dan Navarro has written sung played and acted his way through a rich and varied career…..

Dan started his career as a songwriter, most often with Eric Lowen, for artists as diverse as Pat Benatar (the Grammy-nominated “We Belong”) , The Bangles, Jackson Browne, Keb’ Mo’, Dave Edmunds, The Temptations, Dionne Warwick, Dutch superstar Marco Borsato, The Triplets, Austin outlaw legend Rusty Weir and many more…

In the 1990s, he recorded and toured with Lowen in the acclaimed acoustic duo Lowen & Navarro until Eric’s retirement in 2009. Dan has since transitioned smoothly into a growing solo career, increasingly in demand on the national concert circuit…

He has contributed countless hours in Washington on issues of intellectual property, copyright and performer’s rights, including testimony before the Senate Judiciary Committee and the Copyright Royalty Board on behalf of the Nashville Songwriters Assn Int’l, the former AFTRA, NARAS, BMI , SoundExchange and the musicFIRST Coalition…

Dan also serves on the boards of SAG-AFTRA, Folk Alliance, The Levitt Pavilions LA and the Golden West Chapter of the ALS Association, fighting the neuromuscular disease better known as Lou Gehrig’s Disease, which tragically took Eric Lowen’s life in 2012…

In 2009, after 22 years and 12 albums with Lowen & Navarro, Dan released the spirited “Live at McCabe’s”, backed by his pals, Austin’s now-disbanded Stonehoney. He is currently finishing his next album , “Shed My Skin” — his first studio album of new material as a solo artist — is slated for release later this year.

He is the father of a 20-year-old son and a known abuser of acoustic guitars.