Anne Hills, one of the most beloved voices of the contemporary folk music scene, joins David Roth, with his unique songs, offbeat observations, moving stories, sense of the hilarious, and powerful singing and subject matter at Cellar Stage™ Timonium on Friday, February 8, 2019. 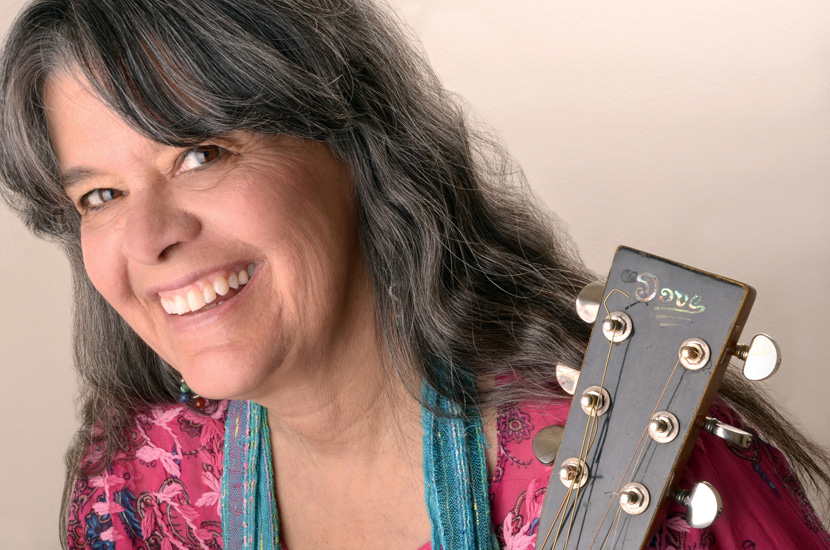 Anne Hills is one of the most beloved voices of the contemporary folk music scene, receiving awards and recognition for her live performances, her unique solo and collaborative recording projects, and her overall artistry and benefit work. Her song “Follow That Road” was the title cut of the Martha’s Vineyard Songwriter Retreat and has been a certified folk classic since the late 1990s. Whether she is singing her own songs, the words of six-year-old Opal Whiteley, or her song settings of the Hoosier poet James Whitcomb Riley; accompanied with her guitar, banjo, or simply a Tibetan bell, she puts her whole heart and soul into the moment. You won’t want to miss a chance to hear her songs and stories in person. She tours extensively, winning over audiences with her warm, lively and humorous performances. (And if you love her writing, be sure to check out her “Haiku a Day” shared via her Facebook page!) The AllMusic Guide says, “A stunning soprano tone has made Anne Hills one of contemporary music’s premiere vocalists … Her knack for writing heartfelt songs [has] brought her to the upper echelon of her craft.” and Tom Paxton says, “Anne Hills is such an exquisite singer that it’s understandable that people might be swept up in the pure beauty of her voice and thereby overlook her writing. That would be a mistake. For me, Anne’s writing, in songs like ‘Follow That Road’ and many others, is as direct, melodic and deep as any work being done today. She is quite simply one of my absolute favorite songwriters.”

David Roth strikes many chords, hearts, and minds with his unique songs, offbeat observations, moving stories, sense of the hilarious, and powerful singing and subject matter. As singer, songwriter, recording artist, keynote speaker, workshop leader, and instructor, David has earned top honors at premier songwriter competitions – Kerrville (TX) and Falcon Ridge (NY) – and taken his music, experience, and expertise to a wide variety of venues in this and other countries full-time for three decades.

David’s songs (“Rising in Love,” “Earth,” “Manuel Garcia,” “May the Light of Love,” “Nine Gold Medals,” “Spacesuits,” “Rocket Science,” “I Stand for Love,” “That Kind of Grace,” and many more) have found their way to Carnegie Hall, the United Nations, several Chicken Soup for the Soul books, the Kennedy Center, Peter, Paul, & Mary’s “Discovered” (Warner Brothers), the Kingston Trio’s “Born at the Right Time,” NASA’s Goddard Space Center (“Rocket Science” went up on the Space Shuttle Atlantis’s May 2009 mission to repair the Hubble Telescope), the classic folk song books “Rise Up Singing” and “Rise Again” (sequel), and 13 CDs on the Wind River and Stockfisch (Germany) labels. Winner of 4 Positive Music Awards and the 2015 Grace Note (Unity Worldwide) for Outstanding Contribution to New Thought Music, David has also been featured on many of Christine Lavin’s seminal Rounder Records compilations. The former artist-in-residence at New York’s Omega Institute has also been a songwriting judge at Kerrville, Napa Valley (CA), Tumbleweed (WA), Eventide Arts (MA), the Avalon Festival (WV), the South Florida Folk Festival, and for the Rhode Island Songwriters Association (RISA).

David has also taught singing, songwriting, and performance at the Augusta Heritage workshops, SummerSongs (NY – where he currently serves as Executive Director), Common Ground on the Hill (MD), the Woods Dance & Music Camp (Canada), WUMB’s Summer Acoustic Music Week (NH), Moab Folk Camp (UT), Rowe Center (MA), Pendle Hill (PA), Lamb’s Retreat (MI), the Swannanoa Gathering (NC), the National Wellness Institute (WI), and for many other songwriting groups and associations around the country. David is also founder/director of the Cape Cod Songwriters Retreat and creator/host of Cape Cod’s “Full Moon Open Mic” which, for the past 12 years has provided a forum for musicians to connect and be heard while at the same time collecting donations ($14,000 to date) for local non-profits to help neighbors in need.