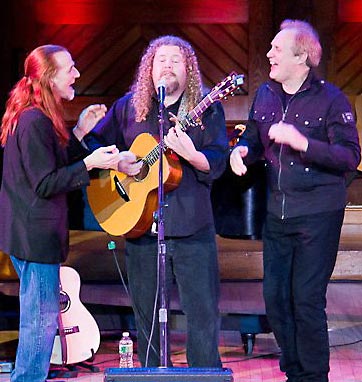 National touring artists Joe Jencks, Greg Greenway, and Pat Wictor have made their mark as veteran touring singer-songwriters, but Brother Sun is no songwriter’s round. The trio’s harmonies, as much as their lyrics, tell what they are about: warm as a campfire, stirring as a gospel church, rousing as a call to arms. Fusing folk, Americana, blues, pop, jazz, rock, and a cappella singing, Brother Sun is an explosion of musical diversity and harmony, in the finest of male singing traditions.

From three major points on the map Boston, New York, and Chicago — Greg, Pat, and Joe have blended themselves into Brother Sun: a unique celebration of the amazing power of singing together. As they will tell you, the music of Brother Sun is not resident in any one of them — but rather it exists in the space between them. Audiences feel this sincerity immediately. Their combined musical skills make for an unforgettable experience — three rich voices blending on a well-crafted foundation of guitar, slide guitar, piano, ukulele, and bouzouki.

Brother Sun‘s self-titled debut CD announced to the world that these respected singer-songwriters had banded together to produce some of the most powerful male harmonies on the acoustic music scene. After two years of nationwide touring and performances marked by outstanding songwriting, ethereal harmonies, off-the-cuff humor, and standing ovations, they have released Some Part of the Truth, a CD that goes a large step further in revealing Brother Sun not only as singers, but as complete musicians.

Some Part of the Truth is cinematic in its sweep, each song like a short film. The CD takes listeners on an evocative and vivid journey through America’s cities and heartlands, where unsung heroes struggle and sometimes win the daily battles of life and love. Grammy-winning Producer Ben Wisch shaped the mood and atmosphere of each song, with Greenway, Wictor, and Jencks all providing instrumental touches ranging from subtle to bold. Superlative bassist Zev Katz, percussionist Joe Bonadio, and cellist Brian Sanders fill out the sound beautifully. With even richer and more varied arrangements than on their debut, Brother Sun keeps reaching farther, and their obvious joy in singing together gives this latest CD its indelible optimism.

The response to the trio’s music has been tremendous! From main stage performances with standing ovations at Kerrville, Falcon Ridge, Philadelphia, Old Songs, Connecticut and other Folk Festivals; to sold out concerts throughout the U.S.A, Brother Sun has earned the respect of fans, colleagues, and presenters alike. And, their music and message appeals to fans of both contemporary and traditional music.

Some Part of The Truth (2013) debuted at #1 on the Folk-DJ Chart, where it remained for two months, and received strong airplay for the entire year, ending as the #1 CD on the chart for all of 2013. The CD also rose to #2 on Sirius XM’s Americana Chart. “Lady of the Harbor,” the lead track, was also the #1 song on Folk-DJ for 2013, and was featured on Lufthansa Airlines In-flight Program January and February of 2014.