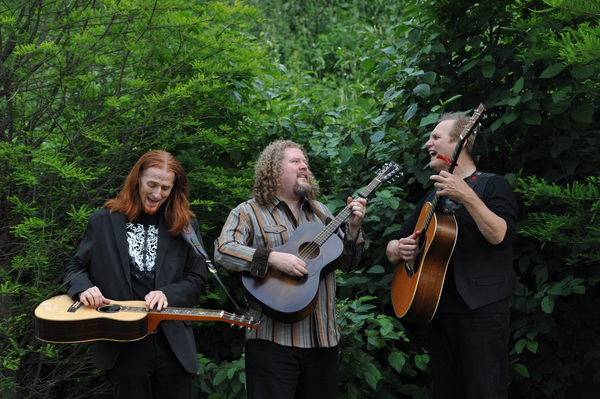 Brother Sun (Joe Jencks, Pat Wictor, and Greg Greenway) bring their harmonies to the Cellar Stage in Hamilton on Friday, May 1, 2015.

Joe Jencks, Greg Greenway, and Pat Wictor have formed a dynamic new male trio: Brother Sun. Their harmonies, as much as their lyrics, tell what they are about: warm as a campfire, stirring as a gospel church, rousing as a call to arms. Calling upon contemporary songwriting, and informed by the deep roots of gospel, blues, and folk, the trio weaves a tapestry of harmony that is brilliantly fresh and yet familiar. Imagine Crosby, Stills, and Nash, with hints of the Dixie Hummingbirds.

The response has been tremendous. The Kerrville, Falcon Ridge, Old Songs, and Philadelphia Folk Festivals all put them on their main stages this past summer, to standing ovations. The trio performed widely throughout the United States in 2011 and 2012, and their eponymous debut recording “Brother Sun,” rose to the top of of the Folk DJ chart. Brother Sun made the “Best of 2011” list for over a dozen radio stations in the US, including WUMB-Boston, WFUV-NYC, and WFMT/The Midnight Special-Chicago. The trio has already booked hundreds of dates going into 2014. They expect to release their second CD in early 2013, produced by Grammy-winning producer Ben Wisch. Fusing folk, roots, blues, pop, jazz, rock, and a cappella singing, Brother Sun is an explosion of musical diversity and harmony, in the finest of male singing traditions.

From literally three major points on the map — New York, Boston, and Chicago — Joe, Greg, and Pat each spent more than a decade touring as acclaimed solo singer-songwriters. They have truly blended themselves into Brother Sun, a unique celebration of the amazing power of singing together. As they will tell you, Brother Sun is not resident in any one of them — it exists between them. Audiences feel this intimacy immediately, three rich voices blending on a well-crafted foundation of guitar, slide guitar, bouzouki, and piano.

“What happens when you unite three of the best male singers in the folk realm who already revel in harmony singing? Brother Sun. While numerous delightful female trios harmonize, few men bond that way these days (unlike the days of the folk revival when they were the norm). Added to great voices, energy and sincerity are worthy compositions in three distinct styles that bring to mind a modern day gospel.” — Rich Warren, WFMT, Midnight Special, Chicago, IL

“Is there any reason why any music festival in America would not want to book this talented, versatile, can do just about any stage, trio? I can’t think of any. ” — Anne Saunders, Falcon Ridge Folk Festival

“The real breakout artists [at Falcon Ridge] this year had to be Brother Sun… who’ve come together to form a trio that’s all about harmony — in their music and in their lives. Their joyful music making earned them a standing ovation in their mainstage set.” — John Platt, WFUV New York

“I just heard one of the best new songs of my life. The song is called ‘Trouble,’ and the group is called Brother Sun. Three magnificent, male voices — together. Gives me the chills — in the nicest way ever!” — Gene Shay, WXPN Philadelphia

“All you need is to hear these guys once and you’re hooked. I’ve been a fan of each of them individually for years, but the whole is definitely greater than the sum of the parts.” — Mike Space, WDIY Lehigh Valley Community Public Radio