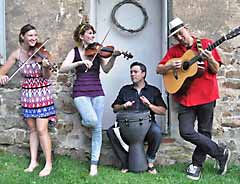 Of Burning Bridget Cleary’s new CD, Pressed for Time, released March 2013, Walt Haake, WDVR Radio Host Celtic Sunday Brunch said, “ . . . By the way, it’s not like me to gush over new recordings. It just so happened that this one knocked my socks off.” Called “the Allman Brothers of Celtic fiddle bands, only prettier” ~ Mike Weekly, Pottstown Mercury — Burning Bridget Cleary features the musical talents of Rose Baldino and new member, Deirdre Lockman, who leads the band with high-energy and tightly woven harmonies in both fiddle and vocals. The driving rhythm and bass end is supplied by Philadelphia native, Lou Baldino on guitar, and percussionist, Peter Trezzi, on djembe drum. Burning Bridget Cleary has played hundreds of performances along the East Coast, and produced three CDs. Their second production, Everything is Alright, was named “2009 Album of the Year” by Boston-based CelticRadio. Their newest CD, Totes for Goats (March 2011), has received plenty of radio attention and praise from reviewers. In the spring of 2011, Burning Bridget Cleary completed a week long tour of Ireland where they performed at seven different venues from Dublin to Galway. While there, the band had a “once in a lifetime” opportunity to visit the rural Tipperary cottage of their namesake, Bridget Cleary, who is remembered as “the last witch burned in Ireland.” Another musical tour to Ireland is in the works for June 2013. Known for their captivating sound and engaging stage presence, Burning Bridget Cleary is currently one of the hottest young acts on the Celtic and folk music circuits. “One of the most exciting bands I’ve seen in the last couple of years!” ~ Jack Baker, The Irish American News.