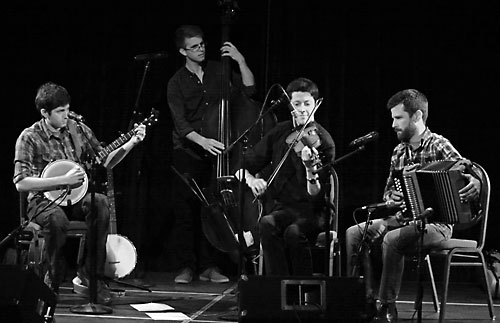 Rooted in the traditions of Appalachian folk music, Brad Kolodner represents the next generation of old-time musicians pushing the boundaries of the tradition into uncharted territory. Son of Ken Kolodner, a world-renowned hammered dulcimer player and old-time fiddler, Brad is regarded for his delicate touch, expressive style, and original compositions, Kolodner has rapidly gained national attention for his unique approach to the banjo at just 23 years of age. Clawhammer banjo is experiencing a rebirth in American folk music and Kolodner is helping to lead the charge as a performer, teacher, Strathmore Artist in Resident, radio DJ for WAMU’s Bluegrass Country, jam leader, community builder and ambassador for Appalachian folk music.

It was at the age of seven when a friend introduced Patrick McAvinue to the violin. In view of his talents, his parents took him to private lessons. The three years he was classically trained during school helped him for when at the age of ten Amy Hopkins, a Peabody graduate, began teaching him fiddle tunes that came from all over the world. He then went on to take lessons from Troy Engle, a multi-instrumentalist who has performed with Patty Loveless, Buddy Jewel, Oak Ridge Boys, and The Issacs. Patrick has participated in many fiddle competitions and was even honored with the title of Delaware State Fiddle Champion repeatedly from 2003-2005. He has also been a Candidate for International Bluegrass Music Association’s Fiddle Player of Year for 2009, 2010 and 2012.

Sean McComiskey is among the most innovative young performers on the button accordion, with a unique harmonic style that has earned him a spot in the pantheon of Irish accordionists far beyond his native Baltimore. As the son of legendary button accordion player Billy McComiskey, Sean has been surrounded by Irish Traditional music his entire life and has developed a deep appreciation for the rich tradition of which he is a part. This has helped Sean establish a reputation as a highly regarded teacher and promulgator of Irish music and earned him teaching positions with the Catskills Irish Arts Week, the Augusta Heritage Center’s Irish Arts Week, the Chris Langan Weekend in Toronto, the CCE Musical Arts and Dance Week in Washington, DC, the Baltimore Irish Arts Center, and the Spanish Peaks Celtic Festival.

Alex Lacquement swears that it was beautiful sirens who lead him to the upright bass at the impressionable age of seventeen. His first music love which lead him to the upright bass was jazz music, something he studied vigorously at Eastman (MM) and James Madison University (BA). Years later he found himself chasing every opportunity to play some happy thumping lines with bluegrass and old-time string bands. Alex also plays with Bumper Jacksons, Brad and Ken Kolodner, Tom Cunningham Orchestra, pick-up groups, and Leah Shaw.