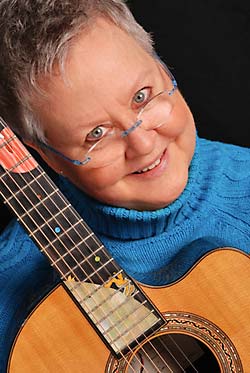 Christine Lavin is a singer/songwriter/guitarist/recording artist and very very funny. Living in New York, she has recorded 20 solo albums (latest: “Cold Pizza For Breakfast” on Yellow Tail Records). She has also produced nine compilation CDs showcasing the work of dozens of songwriters whose work she loves — one of them, the food-themed “One Meat Ball,” includes a 96-page cookbook that Christine edited. For four years she hosted “Slipped Disks” on xm satellite radio, playing CDs slipped to her backstage by compatriots, and is the occasional guest host for the City Folk Sunday Breakfast Show on WFUV-FM. She also writes freelance for various publications (including The Washington Post, The St. Petersburg Times, The Performing Songwriter, and Delta “Sky” Magazine). Her song “Amoeba Hop” has been turned into a science/music book by illustrator Betsy Franco Feeney (Puddle Jump Press), received the stamp of approval from The International Society of Protistologists, and a Best Book Award from the American Association for The Advancement of Science. Christine performs concerts all over the US, Canada, and points beyond (Australia, Germany, Israel), and hosts knitting circles backstage prior to each show. Songs of hers have been performed by artists as diverse as Broadway stars Betty Buckley, Sutton Foster, and David Burnham, cabaret divas Andrea Marcovicci, Barbara Brussell, and Colleen McHugh, the college a cappella Dartmouth Decibelles, and The Accidentals, winners of the National Harmony Sweepstakes championship.

“A Christine Lavin concert is an experience you will remember with big smiles………” ~ Joyce Sica, Uptown Concerts.
[youtube=https://www.youtube.com/watch?v=lquZsEbgQOE]