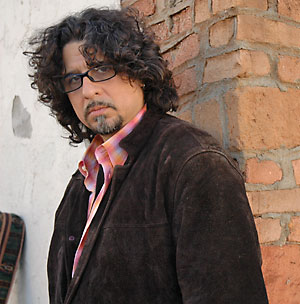 For over thirty years Dan Navarro has written sung played and acted his way through a rich and varied career….. As a songwriter for artists as diverse as Pat Benatar (the Grammy-nominated classic “We Belong”) , The Bangles, Jackson Browne, Keb’ Mo’, Dave Edmunds, The Temptations, Dionne Warwick, Dutch superstar Marco Borsato, The Triplets, Austin outlaw legend Rusty Weir and many more… As a recording and touring artist with longtime songwriting partner Eric Lowen in the acclaimed acoustic duo Lowen & Navarro and, since 2009, as a solo singer-songwriter increasingly on demand on the national concert circuit… As a singer and voice actor in major motion pictures, television series, commercials and recordings, including the films The Lorax, Happy Feet (1 & 2), Rio, Ice Age (2 & 3), Robots, The Mexican, The Emperor’s New Groove, Envy; television series Prison Break, Family Guy, American Dad and The Cleveland Show; recordings with Neil Young, Andrea Bocelli, Luis Miguel, Jose Feliciano, Susanna Hoffs and Jon Anderson of Yes; and commercials for Shakey’s Pizza, McDonald’s, Toyota Coca-Cola, Honda, El Pollo Loco, Nationwide and literally hundreds of others. As an activist in Washington on intellectual property, performer and songwriter issues and Golden West Chapter of the ALS Association, fighting the neuromuscular disease Amyotrophic Lateral Sclerosis, aka Lou Gehrig’s Disease. After 22 years and 12 albums with Lowen & Navarro, Dan ventured out solo in 2009 and released his first album that year, the spirited “Live at McCabe’s,” with his pals from Austin-based Stonehoney backing him. His next album, “Shed My Skin,” is slated for release in early 2014. He also moonlights as a member of the four-artist Christmas revue, Decembersongs, with friends Amy Speace, Jon Vezner and Sally Barris, and is a known abuser of acoustic guitars.