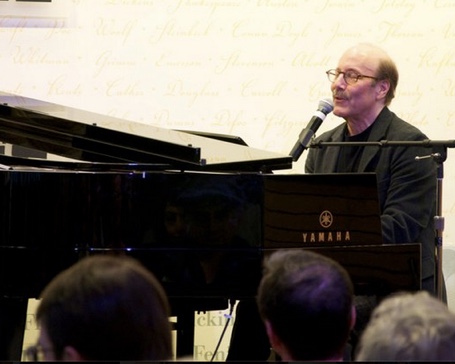 David Buskin has been writing, recording and performing his music professionally since 1970. He’s made about fifteen albums, most as half of the duo Buskin & Batteau or in his notorious “geezer band” Modern Man. His songs and jingles have been recorded by many great artists; a sample: Judy Collins, Peter, Paul & Mary, Johnny Mathis, Astrud Gilberto, Tom Rush, Dixie Carter, Roberta Flack, Mel Tormé, Take 6, Phoebe Snow, Richie Havens and Arlo Guthrie. He is a New York Nightlife Award, Bistro Award and Clio Award winner. Earlier this year he was given the ASCAP Jamie deRoy Award for excellence in songwriting.

Buskin’s organized, written for or participated in numerous concerts for organizations like The Hole In The Wall Camp, Stand For The Troops and WHY/Hunger. For seven years he was a principal contributor to the late Isaiah Sheffer’s Thalia Follies, a thrice-yearly political cabaret in NYC. He has also written special material for, among others, Bette Midler, Paul Newman, Gwyneth Paltrow and Whoopi Goldberg.

His new musical, Victory Train, written in collaboration with Jake Holmes, is scheduled for production in the fall of 2018.

He frequently performs with his talented daughter, Sophie Buskin, as the group Buskin (“We put a lot of thought into the name….”), but still does occasional solo performances (like tonight at Baldwin’s) “to do the songs that embarrass her.”