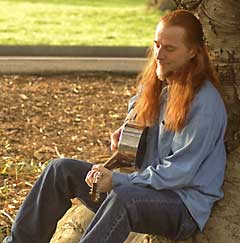 “Pat Wictor is a phenomenal lap-slide guitarist and songwriter as well as an interpreter of others’ music. His lyrics are intelligent and compelling, his stage presence commanding.” -Mike Space, Artistic Director, Godfrey Daniels, Bethlehem, PA.

Pat Wictor first burst on the folk and acoustic scene as an innovative slide guitarist known for doing fresh and memorable versions of traditional and contemporary songs. He’s become a well-regarded singer and songwriter, writing material grounded in the rural country, gospel, and blues traditions of our nation. In the past year he’s been touring nationally as one third of Brother Sun, the powerful harmonizing trio with Joe Jencks and Greg Greenway, garnering festival bookings and a #2 CD on the Folk DJ charts. An American by birth, Pat was raised outside of the United States until his teenage years, living in Venezuela, Holland, Norway, and England. This time abroad gave him an unusually deep awareness of being a resident of a country while also a world citizen. Through these early experiences, he gained an appreciation for taking different paths to arrive at the same destination. Indeed, Pat took a convoluted path to folk music, winding his way through rock, heavy metal, and jazz. He started with guitar, shifted to bass, moved to saxophone, and then quit music entirely before a return in 1993, a time when he also began composing songs. By 2001, he left a teaching career to pursue music full time. An adept improviser and accompanist, he is sought after as a collaborator, sideman and session musician, with numerous recording credits to date. He is a music educator of note, teaching workshops on writing, interpreting, and rearranging songs, on slide guitar and other guitar techniques, and various topics of music history. Recognition and acclaim have followed Pat for years: he won the Falcon Ridge Emerging Artist Showcase, was nominated for Emerging Artist of the Year by the Folk Alliance, was nominated for Gospel Song of the Year by the Independent Music Awards, and was a finalist in the Kerrville New Folk songwriting contest. His CD “Sunset Waltz” reached #2 on the Folk-DJ charts, and “Heaven is so High” and “Waiting for the Water” both reached #4. Released in 2011, the debut band CD “Brother Sun” brings to the fore qualities Pat’s fellow musicians have known about for years: his skills as ensemble player and co-bandleader. Pat’s engaging solo performance was captured on his 2010 CD, “Living Ever-Lovin’ LIVE” — equal parts fireside chat, wide-ranging meditation, and foot-stomping blues. He features his originals and a few well-placed celebrations of his musical friends and heroes. With flowing red hair and zen-like calm, Pat embraces his audience with the sincerity of his music and the clarity of his voice, inviting them in.