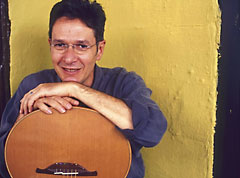 “Pierce Pettis doesn’t write mere songs, he writes literature…End to end the songwriting is brilliant… Pierce Pettis albums are events in my listening. His writing just gets better all the time and his singing is marvelous, wry and warm…” Sing Out!

Pierce Pettis, adored by both critics and public alike, is one of this generation’s most masterful songwriters. His music is distinguished by his uncanny ability to capture universals in human experience by drawing on the humor and trials in daily life. Pettis‘ music can simultaneously pull on our hearts and keep us laughing. The beautiful harmonies, inventive yet subtle percussion, strong guitar, and Pierce’s rich vocals are a constant throughout his body of work. Pierce Pettis has performed in all 48 continental states as well as in Canada and Europe, appeared nine times on American Public Radio’s Mountain Stage, been featured on National Public Radio’s E-town, Morning Edition and World Cafe… appeared on VH-1, CBS News, and the Nashville Network. Duing his long career Pettis has been a writer at Muscle Shoals Sound Studios in Alabama, recorded for Fast Folk Musical Magazine in New York, won the prestigious New Folk competition for songwriting at the Kerrville Folk Festival in Texas, and was a staff songwriter at Polygram and Universal Music Publishing in Nashville. He has received numerous songwriting awards including a 1999 Country Music Award from ASCAP for “You Move Me” — co-written with Gordon Kennedy and recorded by Garth Brooks on his album, Sevens.

Recorded live, his first new album in four years, “That Kind of Love,” Pierce says has less production then some of his previous CD’s (…. “more stripped down…”). Appearing on “That Kind of Love” with Pierce is Kenny Malone (percussion/drums), Stuart Duncan (fiddle), Andrea Zonn from James Taylor’s band (vocals, fiddle), and Phil Maderia (keyboards) plus others. With the release of “That Kind of Love” Pierce Pettis is rejoined by “State of Grace” producer Garry West.