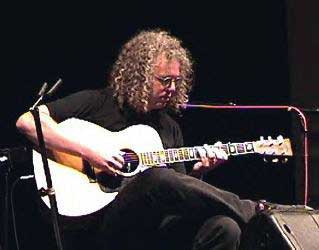 Robin Bullock is a prolific composer and multi-instrumentalist, whose virtuosity on guitar, cittern and mandolin blends the ancient melodies of the Celtic lands and their vigorous Appalachian descendants into one powerful musical vision. Originally rising to prominence as a founding member of the innovative acoustic world-music trio Helicon (winners of the Association for Independent Music’s prestigious INDIE Award for Best Seasonal Recording), Robin’s solo career has won him three Washington Area Music Association WAMMIE Awards, a Governor’s Award from the Maryland State Arts Council, and a feature broadcast on National Public Radio’s hugely popular Celtic music program “The Thistle and Shamrock.” His recorded work includes seven critically acclaimed solo CDs and numerous collaborations, the most recent of which, Celtic Guitar Summit with California fingerstylist Steve Baughman, was honored by Acoustic Guitar Magazine with an “Editor’s Pick” as one of the top CDs of 2003.

“Uncanny ability to combine precision, virtuosity and soul…his reputation as one of the best folk instrumentalists in the business is well-deserved.” — Sing Out!

“A musician whose technical skill and stylistic expertise are second to none…a time-served folkie of the highest calibre.” — Classical Guitar (U.K.)