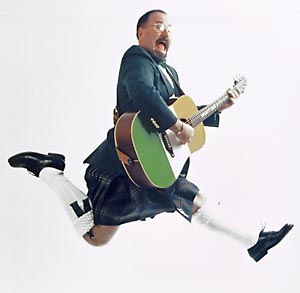 Long before there was a computer on every desk, Seamus Kennedy was providing “interactive entertainment” to delighted audiences from one end of the country to another. He is quick with a quip and likes nothing better than to discover someone in the audience who is similarly inclined. He makes it all seem so effortless that it is easy to miss that he is a superb instrumentalist with an apparently infinite repertoire. The depth of his musicality allows him to tailor his show to the audience before him, whether it be children, families or adults. Originally from Belfast in Northern Ireland, Seamus sings the music of his native land with emotion born of knowing its history firsthand. But he is far from simply a singer of Celtic songs. Fast-paced humor is very much a part of what Seamus does, whether he’s telling a series of rapid-fire jokes or launching into a lyrical parody. He will segue seamlessly from an Irish ballad about a dying town to a rollicking reel and then move into American music, equally at home with folk, pop, country or traditional. Throughout it all, he is having such a grand time that you can’t help but want to join in. (…a wonderfully entertaining Irishman with a happy-to-see-you smile that could light up the sky…a captivating performance.” ~ Anchorage Times.