Just announced! Side By Side at Baldwin’s Station

Home » Just announced! Side By Side at Baldwin’s Station
Categories: Baldwin's Station
Share 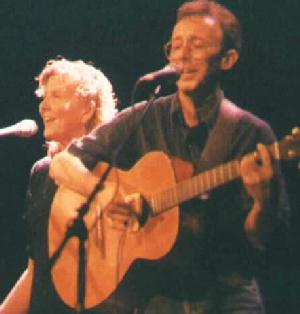 Thursday, February 26th
SIDE BY SIDE

Doris Justis and Sean McGhee are Side by Side. Their close vocal harmonies and guitars back their original songs and original interpretations of the best songwriters. The duo has shared the stage over the years with the Chad Mitchell Trio, Bill Danoff, Nanci Griffith, Debi Smith, Mary Chapin Carpenter, Tom Paxton, Schooner Fare and the Limeliters to name just a few. They have performed on stages from the Kennedy Center to the Birchmere Music Hall — headliners at both in 1999 — Baldwin’s Station, Center Stage and at Washington’s Starland Café. They are featured each summer at the annual Paw Paw Folk Festival in West Virginia. Doris and Sean performed with John Denver’s band in two tribute concerts in Aspen, Colo., and are featured on the CD from that event.

Doris Justis has been a mainstay of the folk and acoustic music scene in the Washington area for several years. She also has appeared in Nashville and at the Bitter End in Greenwich Village among other venues. She has been on radio as a performer, producer and DJ with Dick Cerri’s “Music Americana” and her own “Folk Alley” program. Doris is a recipient of the Appreciation Award from the World Folk Music Association, honoring her years of supporting the music and musicians by producing showcases, coffeehouses and concerts featuring local, regional and national performers. Doris has three solo recordings: “Who To Turn To,” “Doris,” featuring Sean on guitar and as special guest vocalist and “Bright Paintings,” with guitarist Pete Marinovich. In addition, “Doris” includes her composition, “Rainbow Bridge,” inspired by special friends and family. Doris is currently working with keyboardist Dick Kait.

Besides having quick wit and an irreverent sense of humor, Sean McGhee is a master of the 12-string guitar and has an engaging tenor voice. He has been featured at the Birchmere as one of the “Three Folk Tenors.”