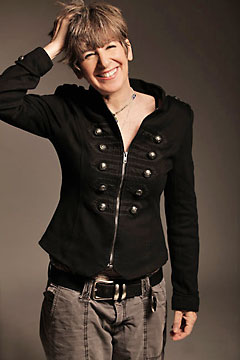 “There is an exuberance and passion shining from SONiA as she warms the audience with her humanity, charm and a touch of glamour.” ~ Roger Dietz, Sing Out Magazine.

From the Opera House in Sydney to the Woody Guthrie Festival multiple first round Grammy singer songwriter SONiA, of disappear fear, continues to excite and ignite audiences in the USA and around the world. Performing with her Santa Cruz guitar, piano, harmonica or a full band she is frequently described as the ‘Female Dylan’. Though that comparison is flattering there is more to this gal from Baltimore who sings and writes in Hebrew, Spanish, English and Arabic. What makes SONiA SONiA is her powerful lyrics delivered in her inimitable style filled with passion and hope. She has recently shared the stage with some of her heroes including Bruce Springsteen, Pete Seeger,and Chris Thiele. SONiA’s proudest moments were singing with Peter, Paul and Mary at the Lincoln Memorial in 2002 and in 2012 receiving the Coin of Honor from the United States Army for her humanitarian songs while on tour in Germany. SONiA has gained a devoted fan base in more than 20 countries performing her songs that range in the styles of Rock, Folk, Country, Latin, blues and Reggae. Selling over half a million units – honesty of her songs touches the hearts and minds of people from a wide spectrum of social and ethnic backgrounds based on the premise that “when you disappear fear between people what you have is love.”

“Quirky and smart, a poet with a guitar, SONiA is a master of crafting songs that make you want to simultaneously dance, sing, and change the world.” ~ Georgia Voice, USA.