Just announced! The Sound of Sleat at Baldwin’s Station! 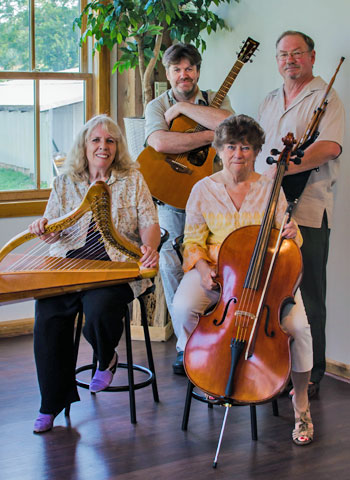 Celtic quartet The Sound of Sleat will perform at Baldwin’s Station in Sykesville on Thursday, September 18th. Tickets & reservations: 410-795-1041


The Sound of Sleat

The Sound of Sleat is a Celtic quartet featuring Scottish small pipes, cello, piano, Celtic harp, accordion, guitar, and vocals. It is a unique blend of instruments with soul-stirring vocals, capturing both the vibrancy and subtlety of Scottish and other traditional Celtic music. Sleat takes its name from a peninsula on the Isle of Skye; the Sound of Sleat is the body of water between the isle and Scotland. Sleat in Scottish Gaelic and Old Norse means “smooth,” very fitting for this great-sounding band. The musicians are seasoned professionals who bring together new and exciting interpretations of traditional piping tunes, airs, jigs, reels, strathspeys, marches and songs. In addition to ancient Scottish classics and rarities, they play music from Ireland, other Celtic lands, Cape Breton, and contemporary composers. Their styles and moods range from dance tunes to ballads, from war to peace, then over to the pub and beyond! (Reverbnation.com/soundofsleatcelticensemble)

Pat Egan is well known as a guitarist and singer in the Irish traditional music scene both here and overseas. He was a founding member of the Irish bands Chulrua and the Hedge Band. Pat was a WAMA nominee for Best Traditional Vocalist in 2010.

Tabby Finch is a multi-instrumentalist and long-time member of the Bogwanderers Ceili Band. She is also a founding member of Mucho Gusto, a world cafe /Latin band; Jug of Punch, The Scones, an Irish pub band, and performs in a duo with Pat Egan.

Bob Mitchell was for many years a member of Iona and Jennifer Cutting’s Ocean Orchestra. In addition to performing on the small pipes, he is a Highland piper in demand for weddings, festivals, and special events.