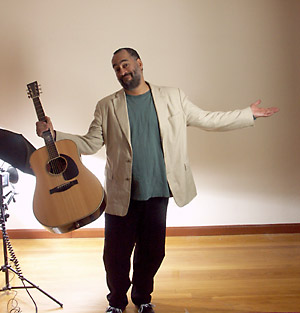 Vance Gilbert burst onto the singer/songwriter scene in the early 90’s when buzz started spreading in the folk clubs of Boston about an ex-multicultural arts teacher who was knocking ’em dead at open mics. Once word got to New York about this Philadelphia-area born and raised performer, Shawn Colvin invited Gilbert to be a special guest on her Fat City tour. Gilbert took audiences across the country by storm. “With the voice of an angel, the wit of a devil, and the guitar playing of a god, it was enough to earn him that rarity: an encore for an opener” wrote the Fort Worth Star-Telegram in its review of a show from that tour. Gilbert’s three albums for the Rounder/Philo label – Edgewise, Fugitives, and the celebrated, arrestingly sparse Shaking Off Gravity, are all essential additions to the American singer-songwriter collection. His latest CD Up On Rockfield finds Gilbert exploring and unabashedly celebrating the influence various famous songwriters and performers have had upon his writing. Each song is penned by Gilbert as if he was co-writing with some of his musical heroes. Who else but him could pull off a concept project such as this and have both press and radio giddy with anticipation? Gilbert is a formidable vocalist. His voice has the beauty of a choral singer, the strength and control of Broadway’s finest, the power of lead rock singers and enough play to match any comedic imitator. Vance’s live shows are spellbinding!