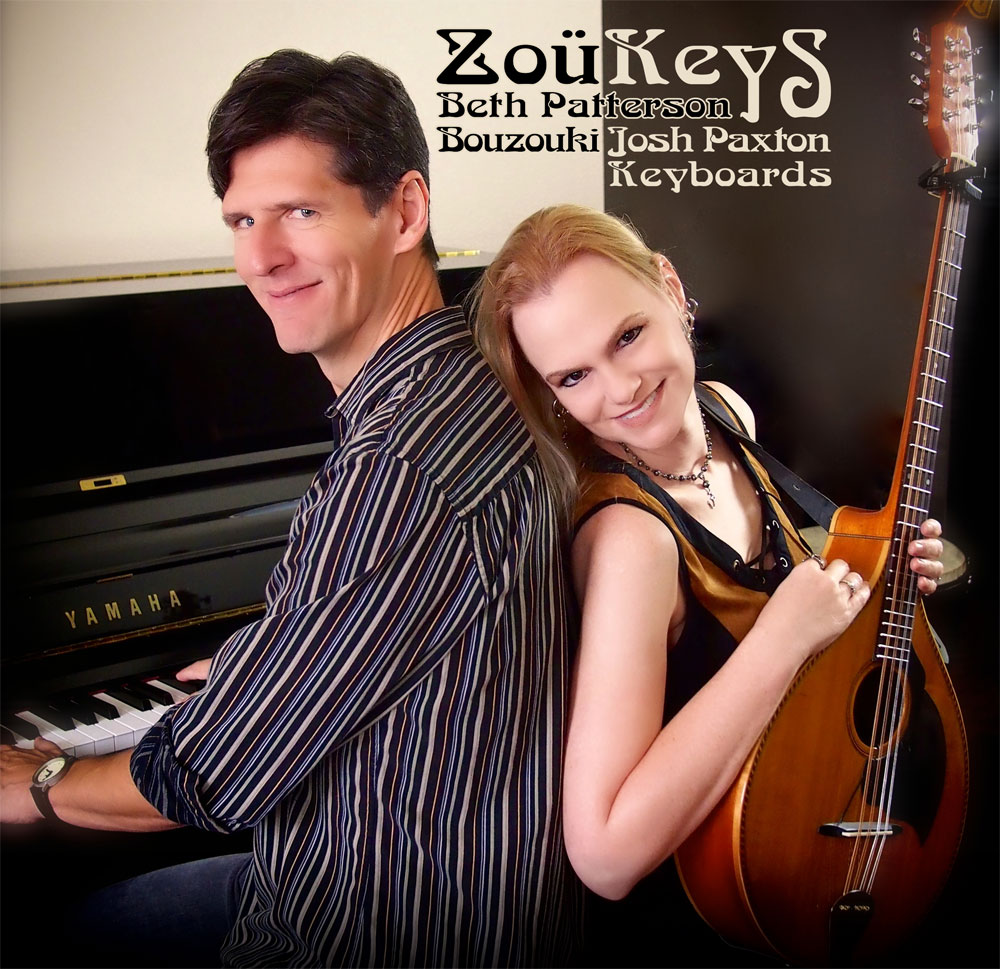 The duo of Beth Patterson and Josh Paxton, also know as ZoüKeys, will perform at Baldwin’s Station in Sykesville on Thursday, February 28, 2019. Tickets & reservations: 410-795-1041

Beth Patterson and Josh Paxton will perform what they describe as an intricate style of bouzouki and piano! In addition to some new original material that they are developing together, Josh invites Beth out of her comfort zone with music by Chick Corea and James Booker. The duo has also been rearranging some recognizable tunes. He encourages her to play jazz and she makes him play Rush and things in crazy Arabic scales.

Beth Patterson was born in a swamp. Okay, more accurately, she was born in a hospital near a swamp, but that’s close enough to romanticize the origin of this Lafayette, Louisiana native. Described by audiences as “a cross between a cobra and a puppy,” multi-instrumentalist Beth Patterson is foremost a player of the eight- and ten-stringed Irish bouzoukis (adaptations of a traditional Greek instrument). Known for her razor wit and musical versatility, her performances are chock-full of drive, savage energy, and passion, laced with humor and rapport with her listeners, dishing out an eclectic repertoire of original and traditional songs. She integrates her quirky, progressive sound with Celtic music and other ethnic styles, resulting in her own sound she dubs “SWAP” (Songwriter/World/Acoustic/Progressive).

This musical mongrel began her career in her early teens as a classical oboist and a Cajun bass player (with the required teenage heavy metal stint on the side), but not truly belonging to any of these, set out to create her own niche when she was adopted by a stray bouzouki. After moving to New Orleans, she began to play the circuit, initially intending to do the folky thing, but accepted gigs of all types left and right because no one told her that they shouldn’t be played on the bouzouki. (Not to mention that it was a sin.) So she tried on genres as though playing dress-up, snatching up influences like a crazy cat lady with felines…she couldn’t bear to reject a thing.

Beth later fled to Ireland, studying ethnomusicology at University College Cork, where she explored the music of Ireland, West Africa, India, Indonesia, and the Caribbean, and began to experiment with fusions of these world gems with her musical old flames. This finally rendered her with the mind of a prog rocker, the heart of a world music-lover…and let’s just skip the part about her soul.

So, what has this hussy actually done? Well, Ms. Patterson has released seven solo CDs and has received airplay in the every continent (Antarctica notwithstanding). She has appeared on over a hundred and fifty recordings (including the nationally-charting Change of Habit by her former band The Poor Clares). Soundtrack appearances include the motion picture The One-Eyed King (starring William Baldwin and Armand Assante), and Mike Judge’s Mirimax release Extract. She’s performed in eighteen countries across the Americas, Europe, Asia, and Oceania. Various artists have recorded over a hundred of her compositions and co-writes across the US, France, Ireland, and New Zealand. She completed a bachelor’s degree in Music Therapy from Loyola University, New Orleans. But she claims that her work will not be finished until the word “bouzouki” is no longer flagged by spell-checkers worldwide.

Josh Paxton is one of the premier pianists in New Orleans. In a town known for its piano players, Josh combines the city’s deep piano traditions with modern jazz twists, classical technique, and a funky rhythmic drive. to create a unique and memorable style that led Dr. John to describe him as “[freakin’] blessed.”

Josh moved from his native Ohio to New Orleans in his early 20s to study with jazz patriarch Ellis Marsalis. After earning his degree, he quickly found himself in demand as a solo performer and sideman, playing solo sets at festivals in and out of town, and touring and recording with such diverse acts as the Wild Magnolias, Li’l Queenie, the Cosmic Krewe, Maria Muldaur, and Bruce Hornsby. And by doing the first written transcriptions of the music of piano legends Professor Longhair and James Booker, he solidified his reputation as a serious scholar of the city’s musical heritage.
After brief stints in San Francisco and Chicago in the early ’00s, Josh returned to New Orleans and has made it his home ever since. In addition to his own solo and group projects, he can regularly be heard accompanying jazz vocal great Debbie Davis; melting faces with funk-rockers Johnny Sketch and the Dirty Notes; and playing musical cat-and-mouse with bouzouki virtuoso Beth Patterson in ZoüKeys, a band that unabashedly calls itself “New Orleans’ premier bouzouki-keyboard duo.”

Josh’s latest album, Standard Deviation, is a solo piano outing that showcases the spectrum of his musical interests, from boogie to swing to Cuban to Henry Butler-inspired funk to general Booker-esque craziness. Music writer John Swenson in OffBeat said, “With [this] album, it’s past time to add another name to the list of outstanding pianists working in the greatest music city in the world.” His next project, an album of duets, is currently underway.